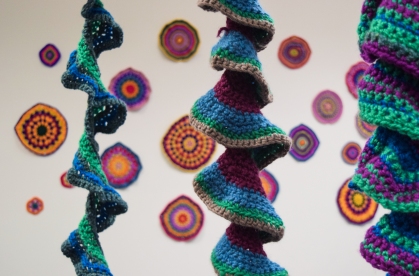 Barbara Touati-Evans is a self taught  artist based in Hampshire. She is the founder of Let’s Crochet Uk, which promotes crochet as a craft and art form through projects and workshops. She is originally from France and has been living in the UK since 1994.

Her practise is influenced by Children’s Art, Art Brut, Decorative Arts and Abstract Art. Meditation, medical imagery, mathematics and botanics have also filtered into her work.

Eventhough she ventures into other media such as painting, drawing and collage to produce mixed media work, she always return to wool and crochet.

Her practise is  mainly concerned with the sculptural and sensory possibilities of crochet. Using the properties of wool as a comforting material, her work is about the tension between protection and imprisonment, between the inside and the outside, between cohesion and fragmentation. There is a strong sensory element where the audience is encouraged to experienced the work through touch.

She has exhibited her work at Southampton City Gallery, WestEnd Centre, Aldershot, Unravel Wool Festival at the Farnham Maltings and That Gallery in Basingstoke. 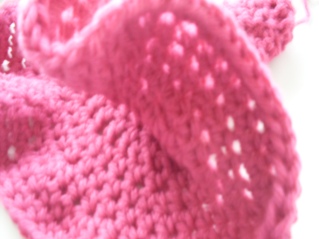